Home > Photo and Videography > Black and White vs. Colour

Black and White vs. Colour 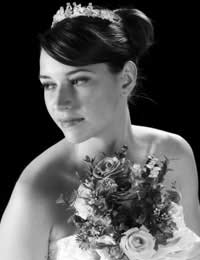 Remember the days when colour TV was almost unheard of? When colour camera film was an expensive luxury? If you do chances are you're one of the happy couple's parents rather than the bride or groom. Today, making a choice between black and white or colour photography's not the financial headache it used to be - and with digital cameras on the scene, there's rarely a need to decide between the two.

However, black and white photography shouldn't be seen as the poor cousin of colour - it's got a lot to offer in terms of picture reproduction and artistic style in its own right. Decide how you want those all-important features printed out by considering which medium will best suit the characteristics of your own wedding.

A large part of whether you choose black and white or colour pictures depends on your personal preferences and the kind of style you're looking for in your pictures. Black and white photographs have a timeless, elegant air that colour can't replicate, and focus on the mood of the moment rather than movement. Whether you're planning a traditional affair or an ultra-modern do, black and white shots will still look classic even years down the line when your dress is out of fashion!

Black and white photography relies heavily on the differences of light and shade within the frame of the shot. If you're having your wedding during the day, or planning an outdoor ceremony, then it's a good choice for making the most of the natural light's effects and the interplay of light and shadows.

On a practical note, if you're planning to resize any of your photos, black and white pictures will stand up better to being blown up than colour ones. This isn't such a big deal in the digital age, but bear in mind that while a grainy black-and-white shot holds a timeless allure, a grainy colour photo just looks naff.

When Should I Opt for Colour?

Colour photography does a better job of picking out minute details than black and white. If you've got special embroidery on your dress, or a bouquet that's teeming with variety, you're probably better off having colour photos to capture them in full glory.

The same goes for any kind of action shots you may want to take during the day. The first dance, the throwing of the bouquet and the newlyweds' departure will all involve a certain amount of movement, which is better captured by a colour photograph.After dark, the flash on the camera is the principal light source for your photographs, meaning black and white shots will end up looking rather flat and dark as the interplay of light and shade's been taken away. For evening weddings and certainly for your reception, colour's a better bet.

Don't feel you have to buy two full sets of prints in different mediums just so you can choose between black and white or colour photos. Digital technology means that colour pictures can be made into black and white shots by the photographer simply by touching a button.

If you fancy a mixture of different styles, ask your photographer to shoot in colour and discuss the possibility of altering some of the shots to black and white later on. It's probably a good idea to get the photographer's input on which ones to change when you go to see the prints, as they'll have a better idea about technicalities such as light, shade and detail.

If you own a digital camera, you'll probably have software that will allow you to convert colour photos to black and white on your own machine. Don't, however, be tempted to do this with your official wedding photos, as the equipment photographers have will allow them to do a much better job converting the tones.

Don't think the options stop at black and white or colour, either. Depending on the mood you're trying to create, old-fashioned sepia tones or a coloured tint can work very well on photographed. Talk to your photographer to see what they can do and if there are any shots they'd recommend tinting.

It's very difficult to argue with a photographer about the style of pictures after your wedding, so you need to do your homework and find a sympathetic snapper before the big day. Talk to as many photographers in your area as possible and get in well before the big day - the best people will be booked up months ahead.

When judging different individuals' work, make sure you see an album covering a full wedding, not just random shots of different happy couples. You won't be able to judge how they'll handle a full day if you don't see the pictures from start to finish.

If you're undecided about whether to have black and white or colour photos, ask the photographer if they have samples of each - or better yet, an album that combines both media. You'll be able to see which moments work best in black and white and which need to be captured in colour, as well as the mood each shot creates.

Finally, be prepared to think in the very long-term before you make your decision. These pictures will be one of the most lasting mementoes you have of your wedding, so it's important you pick a style that won't look like a cheap snapshot, but will provide you with a flavour of the mood, the moment and the madness even when you're celebrating your golden wedding anniversary.