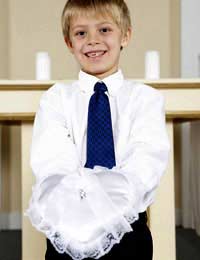 Don't trust your best man to remember the rings on the big day? If you've got young relatives who are dying to be a part of your wedding appointing a ring bearer is a great way of involving them, making a real ritual of the ring exchange, and ensuring your rings make it down the aisle at the same time you do!

The ring-bearer's job is pretty self explanatory - they carry the rings down the aisle, displaying them on a pillow designed for the purpose. Ring bearers are the last to walk down the aisle, behind the bride and bridesmaids, so all eyes will be on them when they arrive. It's obviously a responsible job and should only be entrusted to youngsters who realise how important (and expensive) the rings are to you both.

Make sure you hold your rehearsal on a day and time when the ring bearers and any other young attendants can be there. They're likely to be nervous about their part in the ceremony, and if they've had a chance to go through things beforehand, they'll be much calmer on the big day. It'll also give you a chance to introduce yourself properly to the youngsters if you don't already know them well, and put them at ease.

Traditionally, ring bearers are young male members of your family. If both the bride and groom will both be wearing rings and you've got two such relations between you, give each boy a ring to carry down the aisle. There's nothing stopping you from choosing a female ring-bearer, so don't exclude the girls from your shortlist - they'll probably appreciate being given responsibility for the jewellery more than the boys!

The age of the child you choose needs to be right - they should be old enough to understand what's happening during the ceremony, but not so old that they feel the simple task of carrying the rings is beneath them. Kids between six and nine will probably appreciate the honour most.

Miniature morning suits can be difficult and uncomfortable for active youngsters to cope with, so be sensitive to their needs and pick an outfit that won't be too restrictive. A plain shirt and trousers is fine for budget weddings, while a two-piece jacket and trouser combo looks formal without being over the top. Stick to lighter colours such as cream or beige instead of the sober dark colours the men are likely to be wearing, but match up accessories like cummerbunds or bow ties with the groomsmen.

The most important accessory of the day for the ring-bearers is, naturally, the pillow. This should be a decent size - large enough to allow the bearer to grip it firmly, but not so big that the rings are lost. Keep decoration to a minimum so the jewellery can be clearly seen, and make sure there's a fastening that you can tie the rings on to. A darker coloured pillow is advisable, as it will enhance the visual effect while minimising any stains from not-so-clean little hands. Give your bearer a 'practice pillow' for the rehearsal so they can suss out the best way of holding it.

Do what you can to make sure the ring bearers aren't overwhelmed by the procession and the ceremony. Appoint a groomsman to look after the boys before the ceremony - someone clam and responsible who will be able to take them to the toilet, get them into position and answer any questions they've got. Make sure the parents are seated in the first few rows of the church and keep a space free next to them for the youngsters so they can sit down once their part's over.

Finally, make sure the bearers' contribution to proceedings doesn't go unnoticed by asking the groom to thank them in his speech before he pays tribute to the bridesmaids. You should also bring your tokens of thanks for young attendants to the reception - they'll be delighted to get a present on top of sweets, cake and attention!