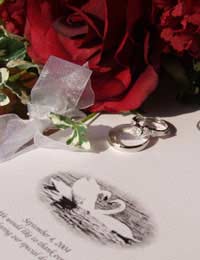 If you’re organising a big wedding the size of the occasion can be baffling for those attending. Many guests will only be acquainted with one member of the bridal party and will know very little about the others involved.

A large location, or multiple venues, carry the risk of people getting lost or turning up in the wrong place at the wrong time, while certain parts of the service will make no sense to the uninitiated.

A wedding programme can solve all these difficulties by explaining what’s happening, when and where it’s at, and who’s involved in the proceedings. Here are some suggestions about what to include and how to make the programme a treasured souvenir as well as a valuable source of information.

The opening pages of the programme should contain the full names of the bride and groom, and the date, time and location of the service. You should also list the names of the bridal party, including both sets of parents, bridesmaids, groomsmen, the name of the official performing the service and anyone with an important role to play in the service, such as readers or singers.

You can make this a simple list, or add photographs of the bridal party next to their names to make identifying everybody easier. A short sentence about each bridesmaid or groomsman, explaining why you’ve chosen them and anything of particular interest about them, is a nice touch as well.

An order of service is a good idea for all but the briefest of ceremonies, as it helps the guests follow what’s going on. It’s a particularly good idea if you’re having a formal religious service, as some parts may be unfamiliar to anyone who isn’t a member of the same faith.

The most basic version will include information on hymns, vows, readings and any other items in the order in which they happen. Adding notes to show when the guests’ participation is required, such as in singing hymns or responses, is helpful.For those holding wedding ceremonies with more complex religious rituals, it’s a good idea to explain what these are and the reason they’re part of the service. Whether its Jewish glass-smashing or walking round a ceremonial Hindu fire, you can relax in the knowledge your guests understand what these actions symbolise for you.

If your reception’s being held at a venue some distance from the ceremony, include directions to the location in the programme, as well as any note about what you can expect there (if the bar’s free or paying etc.)

You can also put a number of background details in the programme, such as the reason you chose a particular song for your first dance, or where you’re going on honeymoon. It’ll enable you to have more interesting conversations with people during the reception if you don’t have to answer the same questions every time you move to a different table.

If you’re having the wedding and reception in a large venue, a map of the grounds showing where everything is – function rooms, bar, toilets, meeting point for bouquet throwing and the like - should be included in your wedding programme. This is particularly helpful if people are arriving the night before, as it gives them a chance to get their bearings. Ask the hotel if they have floor plans or maps of the grounds you might be able to copy.

For those using separate venues for the ceremony and reception, add a map showing how to get between the two. Include details of car parking if necessary, with locations marked on the map.

Don’t forget to put the addresses of your venues on maps as well as the directions, so taxi drivers or local businesses can help guests work out where they’re going.

Put the finishing touches to your programme with some personal additions. If there’s a piece of poetry or song lyrics you like, print them on the inside covers (don’t forget to credit the author, or you’ll have some people asking if you wrote it!). Jazz up the covers with photos of the bridal couple as babies or pictures of your honeymoon destination. You could even add a puzzle for your guests to complete during the day – with prizes offered for the winners at the reception!

How to Cope With a Crisis on the Day

Most Memorable Moment of the Day?

Choosing Poems and Readings for Weddings