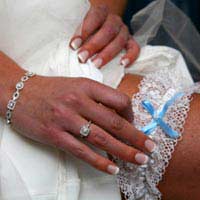 Every part of a wedding a doused in tradition and history, from the stag party to the bride’s veil it’s all there for a reason.

Centuries ago when men chose a woman to marry by capturing her, the best man and groomsmen would act as a small army to fight off the bride’s angered relatives. The role of the best man evolved and became very much about safeguarding the ring and staying by the groom’s side to defend him should any of the bride’s family interrupt the ceremony.

Giving Away the Bride

Carrying the Bride Over the Threshold

The veil can be traced back to Roman times when it was a head to toe cover – that would later be used as her burial cloth. It symbolised purity and innocence. It has lost its symbolism now although is still often worn. In some Middle Eastern countries it is used to hide the bride’s face from the groom, who has never seen her before. Then at the end of the ceremony he’d lift the veil to see his new wife’s face.

The White Wedding Dress and 'Something Blue'

It used to be that blue dresses symbolised innocence and purity and for a long time these were the fashion, hence the ‘something blue.’ White was often associated with Greek weddings as they’d wear white robes to symbolise innocence, joy and love.

The white wedding dress was made fashionable in 1499 and was said to symbolise purity and virginity.

When people lived much shorter and more difficult lives the groom wanted to ensure the bride’s sprit would not leave her body too soon. So during the ceremony he would wrap her ankles and wrists together with grass as to stop her spirit from escaping. These bonds have now evolved into the wedding rings we see today. The rings now symbolise the bond between husband and wife.

Medieval grooms would place the ring on three of the bride’s fingers to symbolise the father, son and Holy Ghost. The ring would then stay on the third finger, which is now the ring finger.

How to Have an Extravagant or Spectacular Wedding