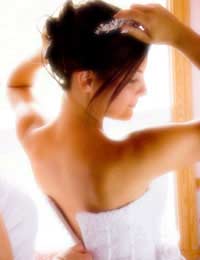 The best wedding photo albums contain not just the big formal shots of everyone looking gorgeous in their finery but pictures of the smaller moments that capture the flavour of the day. However, such seemingly impromptu photos are usually the product of careful planning - telling your photographer when to arrive at different locations, who to follow and what to look out for. Here's some tips on planning your photographic day.

The elaborate process of doing the bride's hair and make-up is obviously worth snapping. Get the photographer to take some 'before' shots as well as pictures of the hairdresser and make-up artist at work, so you can follow the transformation from beginning to end! Any pictures of the bridesmaids' preparations should show them in groups of two or three, so they don't seem equal to the bride in importance.

The best shots will be the ones that show people as they finish preparing for the big event. Such moments include the arrival of the bouquet; the placing of the bride's tiara, veil and/or garter; the finished make-up of the bride; and the addition of any hats to the outfits of the bride and/or groom's mother. At the church after all those shots of the bride, it's time for the groom to take centre stage. The groom and best man should be photographed outside the church, and perhaps at the top of the aisle waiting before the arrival of the bride.

Young attendants are bound to be a fabulous source of unexpected photo opportunities - as long as you can follow them for long enough with the camera! If you've got a ring-bearer, snap the best man handing over the rings before the procession. The photographer will have to get inside the church before the bride's arrival, so they can while away the time snapping unposed pictures of the guests. This is a good time to pick out any interesting outfits in the crowd - shots of avant-garde hats or trendy designer gear are bound to be a source of interest |(and amusement) in the future!

Once the bride arrives, the formal part of the day starts to kick in. The photographer will know what to shoot as the ceremony unfolds, but make sure you provide them with a copy of the service sheet so they know to adjust their camera for different items.

Outside the church, the best man and chief bridesmaid should be heavily involved with getting people together for group shots while the bride and groom are receiving congratulations from the other guests. Try to include at least one shot of the entire bridal party – and, if it’s a small wedding, one of all the guests.

When checking the layout of the reception room before the big day, earmark a convenient spot for the photographer to stand in, which will allow them to get shots of the top table during the speeches, but won’t put them in the way of the guests. Make sure this spot also has a convenient place for them to stash their equipment so it doesn’t get trampled by passing feet.Shots of people eating aren’t usually either attractive to look at or welcomed by the subjects, so make sure the photographer waits until after the food’s been cleared away to start snapping the guests. They can use the meal time to photograph the receiving line, the cake and wedding presents, as well as any entertainment laid on for younger guests.

The big photographic event of the reception will be the cutting of the wedding cake. Shots of the bride and groom cutting it are a must, as well as pictures of them feeding each other the first piece – the only time shots of someone eating are acceptable in a wedding album!