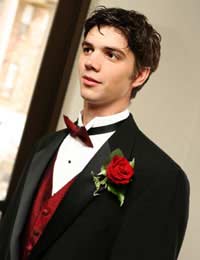 No self-respecting man can say goodbye to the bachelor life without a few friends to help him do so in style - and that's where the groomsmen come in. From organising the stag party to getting the dancing started you'll be expected to be the perfect wingmen throughout the day. Get ready by reading this guide to the best and worst parts of the job...

The perfect groomsman is an outgoing type, ready to make small talk with everybody from mates of his own age to elderly relatives and young children. They'll be calm under pressure, helping to solve problems that arise rather than adding to them. Finally, they'll be people up for a good time - a groomsman who prefers to sit on the sidelines rather than dance isn't going to get the party started!

Usually, being a groomsman also involves a financial outlay - hiring wedding outfits, paying for the stag do and all the associated costs of attending a wedding aren't cheap. Unless the bride and groom think they can afford to pay for everything, it's advisable to steer clear of people they know are short of spare cash – the happy couple have enough to pay for without subsidising their friends unnecessarily!

The groom needs to walk a fine line when choosing his attendants - on the one hand, it's important to satisfy the honour of family and friends by offering them a role, but it's equally vital not to pick people who are likely to be lazy or disruptive. If the groom's spoilt for choice, he should make a shortlist of people who might be suitable, then talk the situation over with the bride and the best man to get their opinions on possible candidates.

Once the initial planning's done, it's time for the groomsmen to get involved in whatever chores need to be done. From driving the bride and groom around to check out venues, to helping carry boxes of decorations, picking up sale-or-return wine and remembering to get outfits from the hire shop, no task should be too big, small or tricky for you to sort out!

One of the more fun parts of being a groomsman is helping the best man organise the stag night. Agree to split up the chore of contacting potential attendees, then divide up the rest of the chores between you - one person to book accommodation, one to organise activities, one in charge of transport etc. That way, no one person's more stressed out than another and there'll always be one person able to relax and enjoy the fun with the groom.

As soon as the groom's decided what he's going to wear, the groomsmen should go off to the hire shop with him to choose morning dress, suits, kilts or whatever he's got in mind. It's best to do this together, as it makes it easier to have one booking rather than several separate ones and means there's only one bill to settle at the end.

From an aesthetic point of view, shopping together also makes co-ordinating accessories - shirts, ties, cravats, cummerbunds etc - simpler. Organise a trip out to buy these items, which is usually easier and results in a better fit than renting them. Make sure you're aware of the wedding's colour scheme and pick two or three colours that fit in with it. Depending on how many of you there are, agree on who's going to wear which colour and shop for accessories in that shade. None of you should wear the same colours as the groom, who needs to stand out on his big day.

Traditionally, groomsmen were expected to pay for their own outfits, but if the bride and groom feel they can shoulder the cost there's no reason to dip into your own wallet. If you're paying for your own clothing and are on a budget, ask if it's OK just to buy accessories that will complement an existing suit, rather than buy or rent a new one.

The groomsmen's biggest chore on the day will be ushering - organising the seating of guests at the ceremony. Arrive well ahead of time to familiarise yourself with the layout of the seats, as well as to sort out piles of service sheets or wedding programmes to pass out to each guest as they enter.

To avoid confusion, leave the seating of family members to the mothers of the bride and groom, who will know their relatives and be able to direct them to appropriate places. Use your common sense when seating all other guests - give elderly people comfier, cushioned chairs, and seat families with young children at the back so they can escape quickly if need be, before taking your own places up front for the start of the service.

At a formal wedding, groomsmen may be included in the receiving line, greeting guests as they arrive at the reception. Once you get inside, help the newlyweds by circulating to check everybody's happy during the meal - the groomsmen can split up the room between them and each keep an eye on a specific number of tables.

Once the meal's over and the speeches have finished, it's time to begin the dancing! The groomsmen need to be ready to lead people onto the floor once the bride and groom have had their first dance - either the bridesmaids, or whichever young female guests are closest to hand! It's diplomatic to go round and ask family members to dance, particularly the older relatives who may be reluctant to get up.

You don't want to bother the bride and groom if you can help it, so keep half an eye open for any sign of bad behaviour during the celebrations. A quiet word with the barmen will alert you to anybody who's drinking to excess and could cause a problem. Confront people in pairs rather than on your own - it's much easier to find a bucket for a queasy guest or escort out a gatecrasher if there are two of you.

When the bride and groom have left and everything's in a mess after the celebrations, shake off your hangover and help with the clear-up. There'll be rubbish to throw away, empties to dispose of, bills to pay, hired clothing to return - in short, plenty of work for an army of groomsmen! Only when there's nothing more to do should you excuse yourself to ring that bridesmaid whose phone number you took last night...

The Perfect Wedding Outfit For Guests